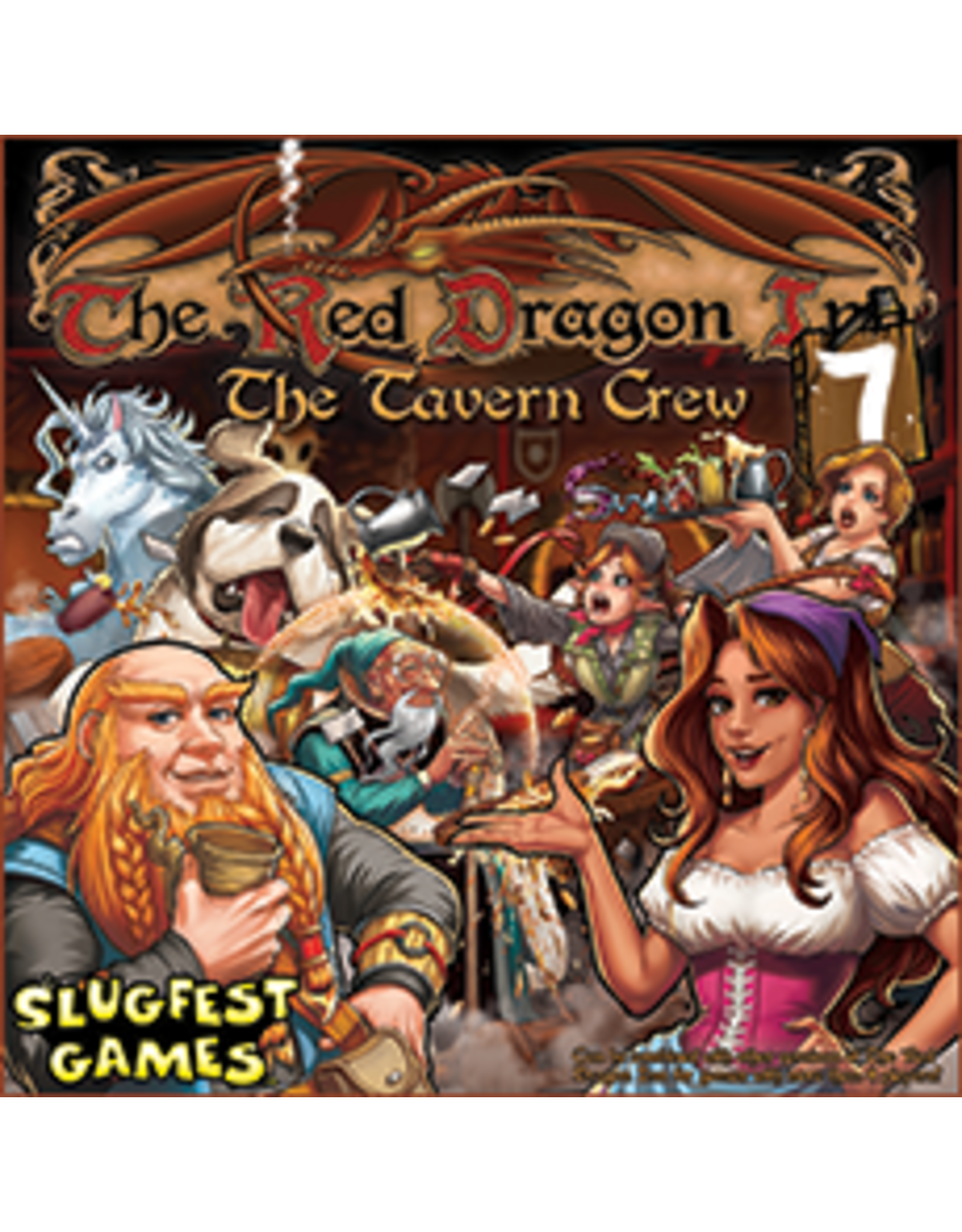 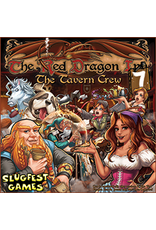 Serving up drinks and hospitality to the hardy adventurers of Greyport is an exciting, often difficult, and always thirsty task! The Wench finally joins the party at The Red Dragon Inn, and she’s bringing the rest of the tavern crew with her! Now the staff can kick back with a mug of ale, a fist of dice and pouches lined with adventurers’ gold.

Drink, gamble and roughhouse with your friends. But don’t forget to keep an eye on your gold. If you run out, you’re going to be on dish duty for the rest of the night. Oh… and try not to get too beaten up or too drunk. If you black out, your coworkers will divvy up all your gold as tips before continuing the party without you!

The Red Dragon Inn 7 is a new, 2-4 player standalone expansion to The Red Dragon Inn series of games. In this game, you and up to three of your friends will play as the staff of our beloved tavern, enjoying the night after all the adventuring patrons have passed out in their rooms (or stables). Of course this won’t be a quiet night of relaxation! Gamble, brawl and drink the night away as you prove you have what it takes to keep up with the heroes you handle night after night. The Red Dragon Inn 7 can be combined with all of our previous releases, letting you mix up the characters (and the mayhem) for games with four or more players!

It’s pronounced “War-thorn”, though he’s been known to chortle whenever anyone pronounces it “Wart-horn”. This dwarf is the jovial owner of the Red Dragon Inn, and after years of entertaining adventurers at his fine establishment, he can spin a yarn like no other!

The Good: Warthorn knows a bit about almost everything!

The Bad: …and he’ll happily talk your ear off about it!

Molly is a chipper halfling who works a normal, stable… er, reliable job at the Red Dragon Inn… or at least it would be, if only adventurers would ride horses like everyone else! Unfortunately the patrons’ clever animals frequently get out of hand and refuse to accept the concept of “indoor” and “outdoor” beasts.

The Good: Molly’s made friends with a whole menagerie of magical and mundane mounts!

The Bad: They’re not always friends with each other… or the furniture… or you…

An amiable retiree from the adventuring life himself, Jasper is still tough as nails and ready to step in on any kerfuffle. You’ll have a bear of a time gazoozling this wizened wizard because he’s got his eye on all you whippersnappers at this here groggery!

The Good: Jasper keeps folks from sneak-thievin’ the customers.

The Bad: He does, however, frequently lose track of his teeth.

The hardworking and ever-professional woman known by most patrons (but not all!) simply as “The Wench” is here to serve up drinks and take a minimum of your nonsense. With the keys to the tavern’s special reserve in her pocket, she’ll show you why it’s her job to play with the drinks.

The Good: The special reserve drinks are some of the best in the land!

The Bad: The special reserve drinks are some of the most potent in the land!

Includes player mats and deck dividers that are compatible with The Red Dragon Inn 5: The Character Trove! Also includes a Prize Card and rules for the new Prize Variant!